i woke up this morning feeling wretched. suppressed grief about nic had mixed in my dreaming head with worries about poor quality of work on a building site. i struggled for more than half the day.

you can't know in advance how a bereavement will affect you. they're all as unique as the neural tangle they uproot. it's like opening a data cabinet and tearing out a random fistful of wires. there's no predicting where the spaghetti will end or what connections will be disrupted.

funerals and memorial services are bittersweet. you meet a lot of old friends that you haven't seen for ages, and you're all really pleased to see one another - but you'd rather have done it another way, and one of you is missing.

the liturgy nailed it. "we should not be here" was the refrain, and outside the church afterwards i cursed that hard reality. it was fucked up. we really shouldn't have been there.

the one moment that lifted my heart was the release of balloons by the children in the churchyard. it was a lovely act, as if we were letting nic go, up into the sky, until 'a cloud hid him from our sight' [Acts 1 v.9]. 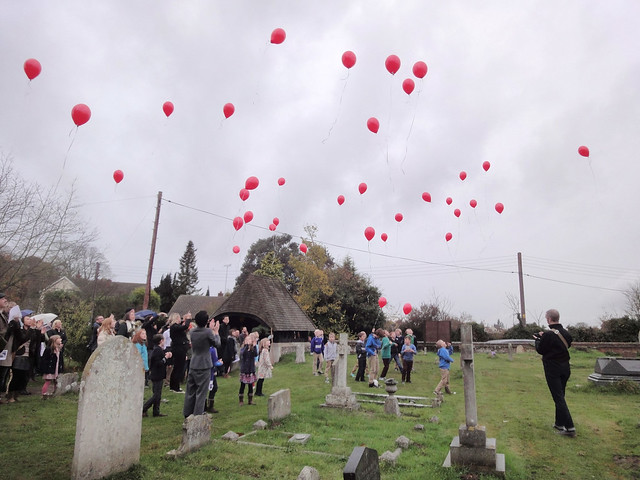 many wonderful stories were told about nic. most of them involved mischief of some kind - pranks, humour, misbehaviour, intellectual and theological mischief. nic loved to burst a bubble. his curiosity wouldn't let things lie, wouldn't take things as given. some resemblance to muttley was noted by a number of people.

nic's death is a warning. we always think we can meet up some other time - when we're less busy [but we're always busy]. and suddenly there is no more time.

the same busyness claims the time we should have been doing the stuff we were placed here to do - our unique contribution or gift. instead we shopped and cleaned and cooked, made trivial phone calls, worked for money, in the hope that when we'd done all these acts of maintenance they would give us time and space for what we really meant to do. i get now why stereotypical artists live in poverty or squalor - their precious time goes into their gift not sustaining a lifestyle. nic got more stuff out there than many, but he only left us a fraction of what he had inside him.

Thank you for this, Steve.