so they used this photo on the cover of this week's church times...

i hope to get an actual copy from somewhere, there might be other photos used inside.

'textile field' by ronan and erwan bouroullec, turns the raphael court at the V&A into a perfect example of the new church environment. except it's an art gallery, and commissioned for the london design festival. sadly today was the last day so you just have these pictures. 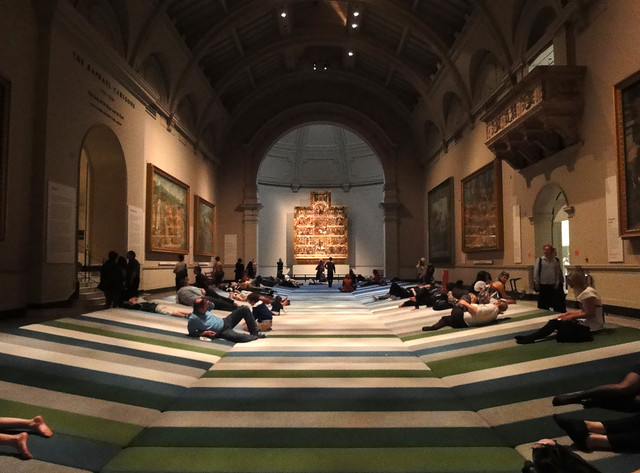 the field consists of padded fabric panels. you take off your shoes and walk, sit or lie on it, to contemplate the artworks. childern love it - they roll about and turn somersaults. it's an all-age experience, unless you're too old/stiff. "and how do you do teaching?", the church voices ask. well, the cartoons are all major biblical scenes with large print explanations beside, so you can unpick the iconography at your leisure. don't look too closely at the altarpiece though, it's gruesome.

so how about it, church people with budgets? get rid of those wooden chairs in the naves of most of our cathedrals, and do this so we can look at the vaults in comfort. i'm sure we could do some good adaptations for people of limited mobility. add some nice music, people will love it, as they did here.

That's beautiful.... Sigh. We have the space, if only we had the money. I can hear all the old people complaining already about sitting on the floor :) But I can't see how this would be less comfortable than hard wooden pews anyway!

it just needs level edges outside the slopes - they're at seat height already. or something more folded so one could sit facing in, having walked on through the centre section.

my favourite things at this year's tent london:

1. flat frame systems' bicycle made from engineered wood. the frame can be in many different plywoods and veneered to your liking. cost of frame itself just under £1000 but add the other parts like this one and it's £2000 or so. 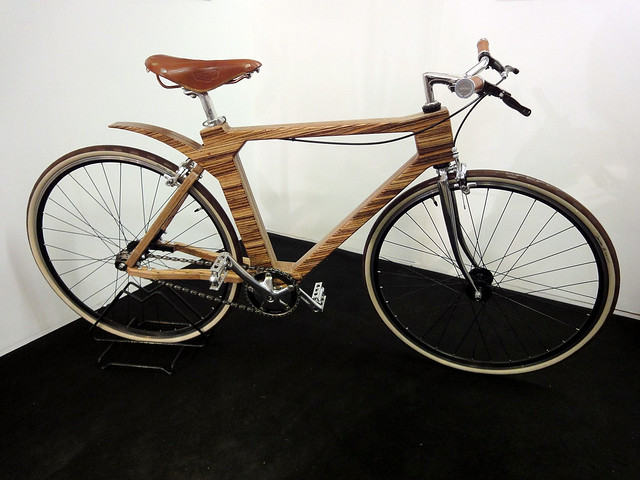 2. also with a touch of cycling, patrick laing's illustrated plate series 'i could just go to the shops' which celebrates making something unique rather than buying mass-produced [the 7th plate shows graham obree's 'old faithful' bicycle]. the plates themselves are wedgwood. 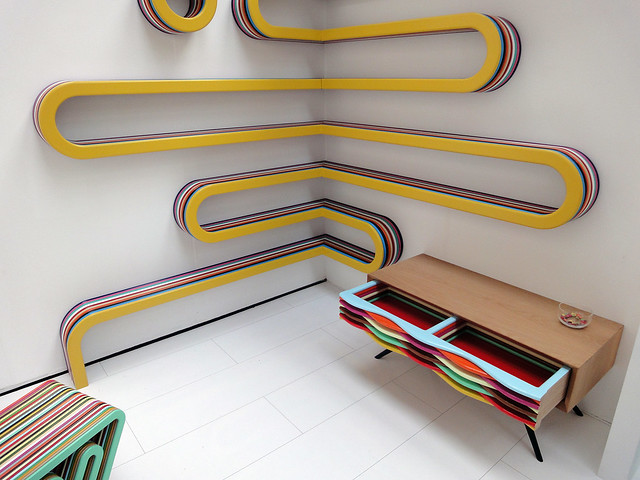 4. newcastle specialist joinery firm raskl have a table [probably not for sale] in the form of the iconic gateshead car park: 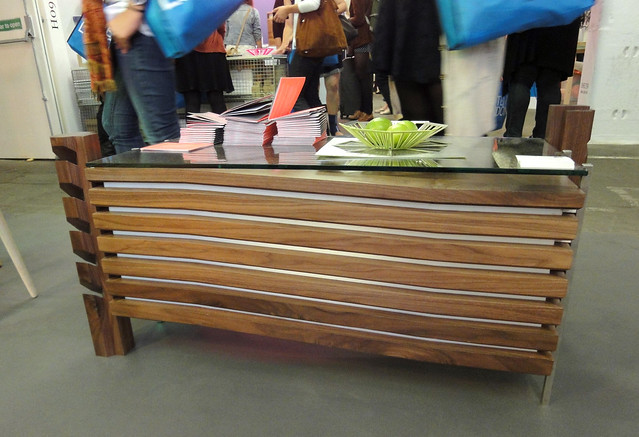 5. alison milner's stools can be taken apart and carried in a string bag. she is also showing beautiful vitreous enamelled spun steel bowls which cost a fortune - but are highly crafted and probably almost indestructible.

what a difference 13 years makes. here's matt at greenbelt in 1998, at the bottom of the bill with about four people in the tent, one of whom is me taking a photo: 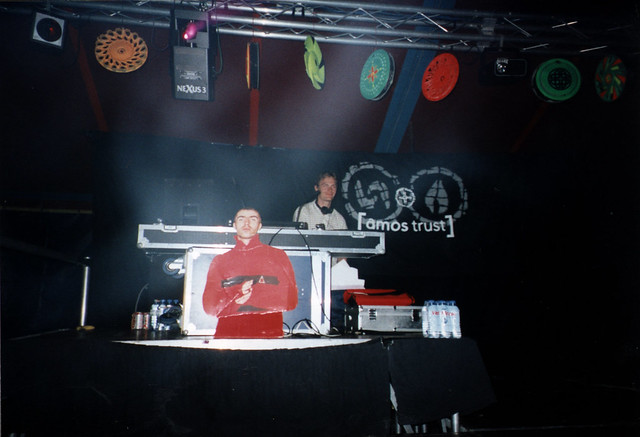 and here's matt at greenbelt in 2011, using different technology and creating a dubstep mosh pit: 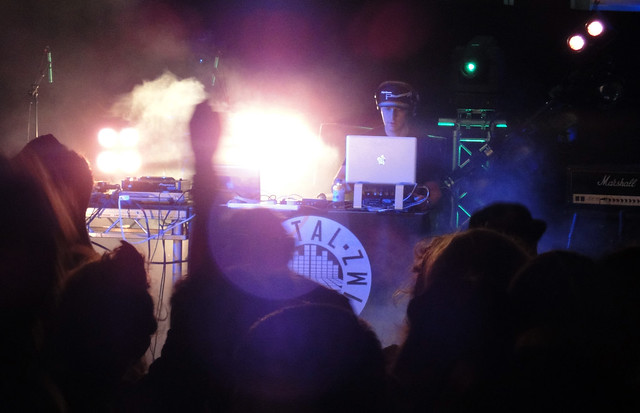 here are some children at greenbelt in 1998: 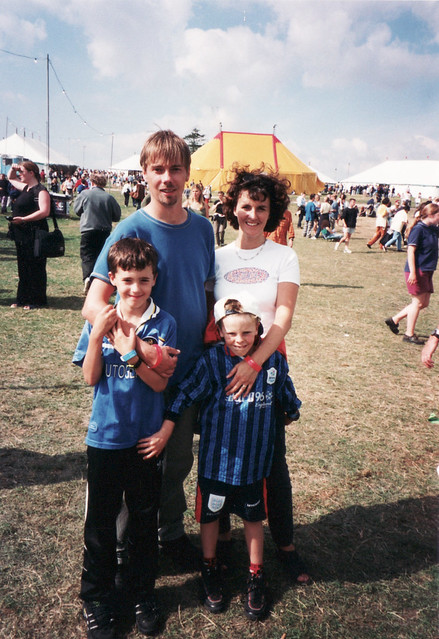 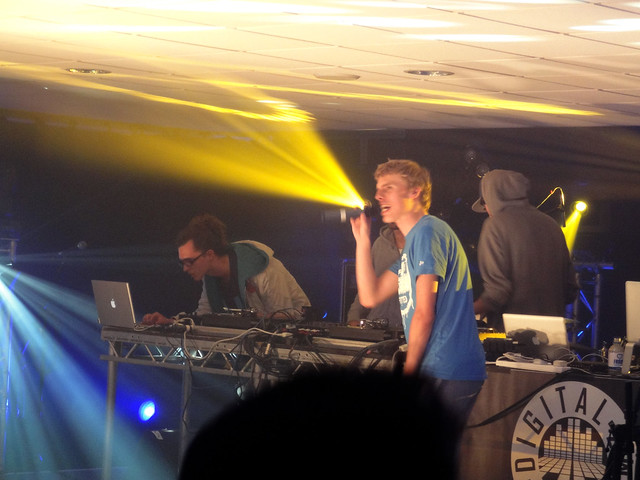 in regards to your flickr description of the first picture.. i'd say cardboard noel was being a 'wonderwall'. ;)

so, here are the photos of grace's short-lived 'you are what you eat' installation at greenbelt. since there was no obvious differentiation between it and the 'messy space' play area, children used it as a playground. it had to be closed after about three hours due to the mess. we were very angry. we had expected a certain amount of mess - eaten chocolates, squashed vegetables - we had cleaning materials and spares. however the children [it may only have been two or three] had opened half the contents and created a strange liquid mess in the mixing bowl. that seemed to be where the cucumber, cabbage and all of the peppercorns had gone. many things had been spoiled by being opened and having fingers stuck in them. we couldn't work out why some chocolates and cakes were eaten, but others not touched eg the fun-size mars bars and the crisps. the eggs were intact but the instant coffee opened. and so on.

the following morning we dismantled the whole thing. at the time we couldn't see how to make it work without spending more time and energy than we possessed. we had worked very hard to create it and were entirely dispirited. all the stuff that survived is in the process of being eaten, the racks will do for my shoes and books, the fridge went back to the recycling centre whence it came. i wish i had taken photos of the trashed version now, but i couldn't face it at the time. not a good way to start greenbelt - i was pretty hurt for a couple of days.

I'm really sorry to hear about that. I'd be pretty hurt as well.

Ah but you have photos of the installation that will last forever. If only there was a time-lapse of the children destroying it. That would be kind of awesome.

ironically we had been joking about rigging up richard baker's new webcam to watch the installation. that would have given us not only a record of its destruction but the ability to put the miscreants' faces on the big greenbelt screen.

a pity the site was trashed, i am sorry to hear it.

however, i can't help think the children truly added to your installation.. rampant over-consumption, complete disregard of what is consumed, what is felt.. no concept of garbage-in garbage-out, these things are all very distinct waypoints in western culture of instant gratification/little or no ramifications..

the little children running rampant over your heartfelt communique.. grabbing, mixing, taking on whimsy, discarding, destroying, mashups, RIOT. it's a heady mix, and i think a distinct message.

just my thoughts. i do feel hope when i see a ripe avocado though.. =D