via tim westcott aka wndfrm:

undersound is a proposal for a socially interactive music network in the tube. it will allow you to upload or download tracks at tube stations, and swap them with others on the move. the system will map the movements of tracks - who took what where - and each track is tagged with its point of origin - what station it 'belongs' to.

Each station's display will uniquely reflect information pertinent to that station so that users are presented with a quick visual overview of what the station has to offer. The display will function as a visual representation of the sum of all the individual actions that shape the undersound network.

it's pretty similar to what i had in mind for spi-fi. someone in melbourne asked me if anyone was working on the technology for the spi-fi stuff or had actually done it. the answer is, not for churches, but the thing itself is almost upon us. no doubt if undersound comes to fruition it will be detourned by people like grace for spiritual purposes.

...but before i deal with melbourne i have to post the photos of 'breathe' on flickr so that jenny baker [who is one of its creators] can make use of them. breathe is a kind of version of the labyrinth but without a labyrinth, aimed at teenagers [though it works well enough for the rest of us]. each segment of the mat has a station, with words and music on an ipod shuffle - the next technological step from the labyrinth's cd walkmans! i enjoyed doing breathe at greenbelt - it's pleasurably made and well thought out. well done jen and friends.

i was doing pretty well on the footprint station until i had to add in all the flying i've done this year - texas and australia. that's another two planets' worth of resources taken. globetrotting emerging church people take note!

very cool service, any chance that jenny will release the liturgy soon, or is she thinking of adding it to another book/resource?

the latter, i think! if i remember rightly it's been developed as a resource for a publisher - i forget who - to do in schools. we always had problems with the labyrinth in that teenagers didn't go for the path-walking aspects and wanted to go around in little huddles with their friends. so this is the response.

its interesting then if it's a response to the huddles that:

a) she continues to use ishuffles which only one person can listen to at a time, which you obviously cant do in huddles.

b) the activities are still tasks for the individual rather than tasks for groups of three or four...

back from australia but mostly sleeping atm. obviously a lot of photos to go on flickr this week.

saw 'the devil wears prada' on the flight home. reminded me of my own life, in spirit if not in actual circumstance. person takes job against their value system, is obliged to commit fully and then finds they're very good at it, even enjoy it, but their personal life is laid waste by the do-it-now demands of their important employer. i found streep too artificial, more performance than person. those kind of people don't need to be artificial to get what they want.

twas nice to have you over... until greenbelt or some other excuse i can find to head over :P

i'm probably supposed to be doing something else but i don't get many chances to sit on a balcony in pleasantly cool weather while noisy and colourful birds fly about in the river valley trees. thursday was the hottest october day here for nearly a century - 37C and still 25 or so at night. after this year's hot english summer i'm acclimatised but the heat here is thankfully drier than in london. but there were a lot of fires here and there's a ten-year drought which isn't getting any better. 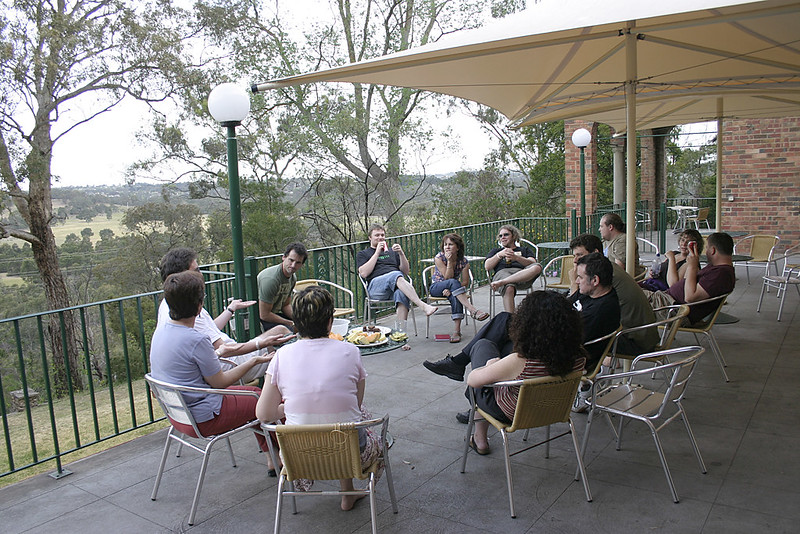 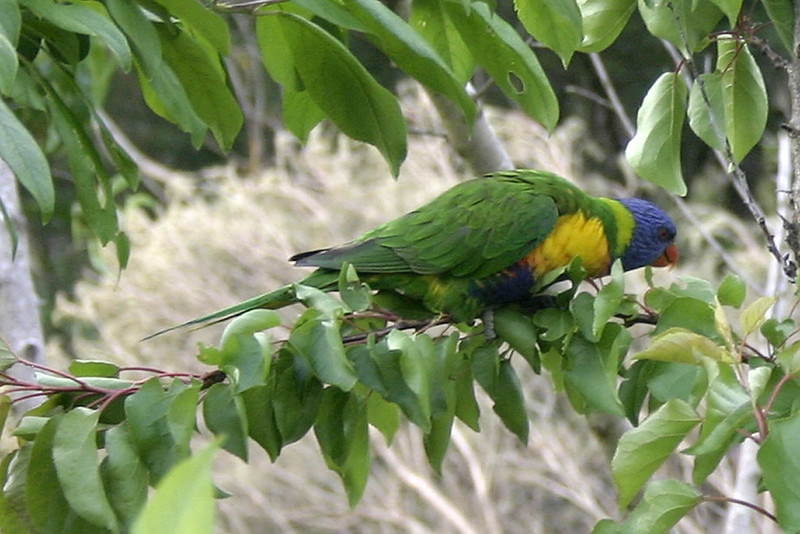 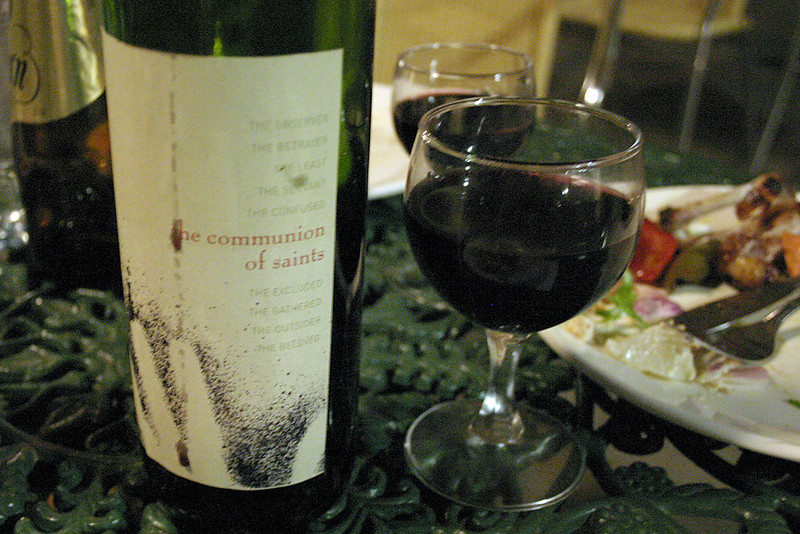 craig mitchell [and the team of chefs] cooked a splendid meal for us last night. the wine[s] had special labels for the occasion. i was too muzzy-headed to blog afterwards.

i've come to the conclusion that i should just photograph food here, it's what melbourne's really about.

that blogger's free wifi list is holding good so far. i think i'll start a free wifi section on alternativeworship.org - get some city lists going.

but uploading onto flickr is a bit too slow for comfort. i think that will have to wait until later. meantime it's easier to add the occasional photo here.

have just had lunch at joe's garage in brunswick street, will now head downtown to call on mark pierson. morrocan meal later, then a 'meet-steve-at-the-pub' session. who knows who will come? 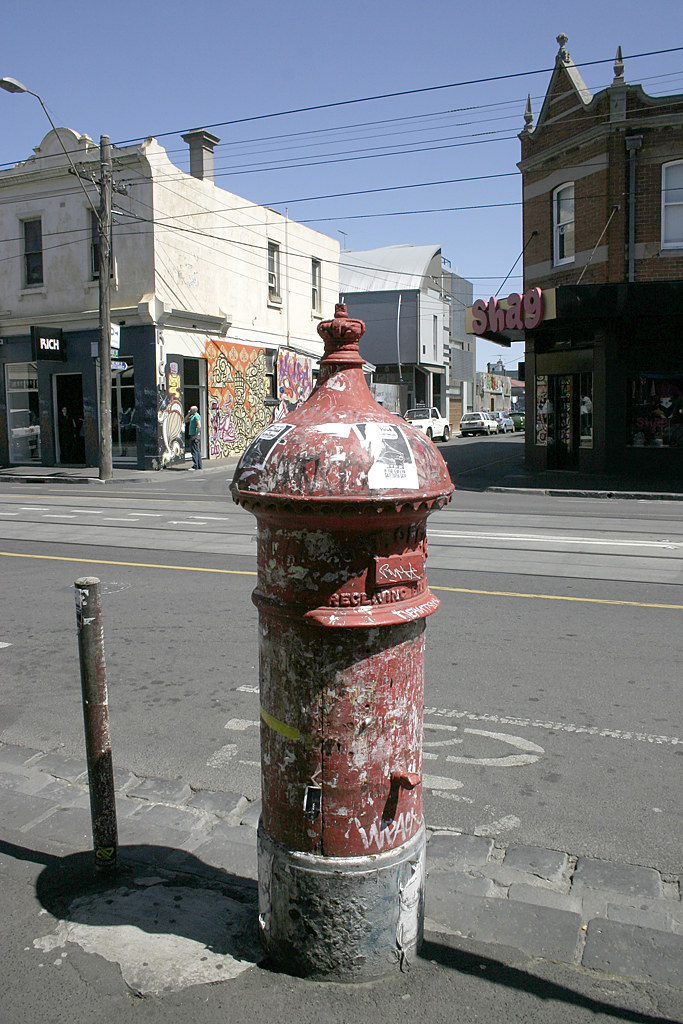 first task in melbourne - find cafes with free wifi. cheryl tracked down a list on someone's blog, i went off to test it out on behalf of the emerging church ;) meet mark pierson later. no particular signs of jetlag but my body is tired and aching from the flights. 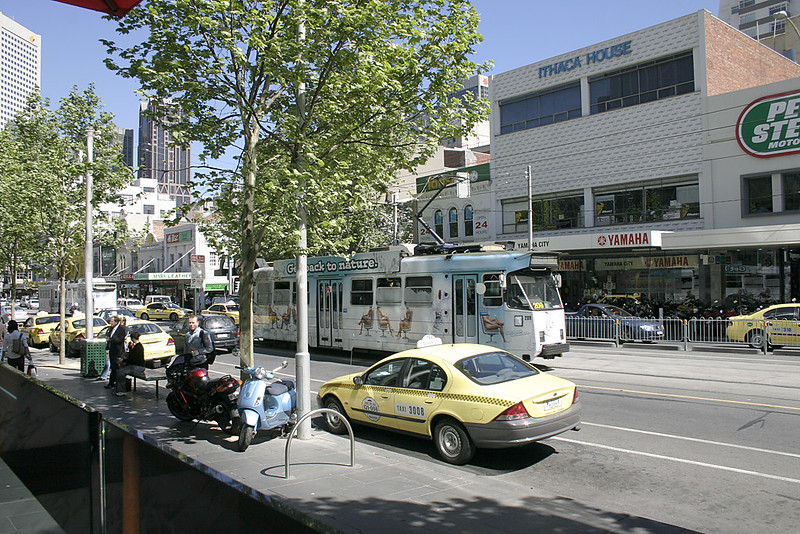 welcome to our town! I see you've landed up the motorbike end of Elizabeth St...

Let me know how the free wifi search goes - I've had little luck in finding good spots (ie. good coffee + free wifi + decent view/surrounds) and my poor palm lifedrive is begging to be used in the real world....

(if you come up to North Melbourne for coffee/lunch I'll let you hijack our wifi network... :) )

Steve, whilst in Mellie make sure someone takes you to Coco Black. Get yourself a hot chocolate and it'll make up for the lack of wifi. I know you've never met me, but trust me on this one.

Having just moved to North London I'm in desperate need of a good coffee...still looking...

friday was my last day at my old job. hasn't sunk in yet. today i fly to melbourne to do church stuff with cheryl, plus a couple of days with craig in adelaide.

i have to say blog entries like this and this weird me out a little ;) not used to seeing myself as a headline attraction.

just wait till you see the billboards on the way in from the airport.