was in a client meeting today discussing white-noise and pink-noise sound masking for their offices - this increases acoustic privacy by providing a barely-noticeable background hiss which helps to cover conversations and other sounds. the brain tunes it out while retaining the masking effect - you only notice it in the sudden silence when it ceases.

and someone wondered jokingly if it could carry subliminal messages on behalf of the client organisation. and the brand management woman suggested 'orange noise' (the client's brand colour). and i was struck by the idea of 'the woman who sells branded noise' - like something from a william gibson novel. she would become very rich by selling subliminal 'coloured' noises carrying targeted messages for environments such as offices and shops.

was at the first 'st mary's sessions' on friday evening, hopefully the first of many. chris kennedy the trainee vicar had the idea to use st mary's church as an informal concert venue to showcase local musicians - not a 'christian' event as such, just helping the local music scene along and getting more use out of what everyone agrees is a cool event space. you pay £4 on the door and bring your own food and drink to consume on the picnic rugs. the guy in the adjacent mini-supermarket must have wondered what was happening, people were in and out grabbing beer and cakes all evening. my photos here.

friday's musicians were paul adams and johnny ashby, semi-acoustic blues-rock and very enjoyable too. the intention is to do the event every three months or so, maybe alternating classical and rock performers. i really hope this does well and gets momentum. 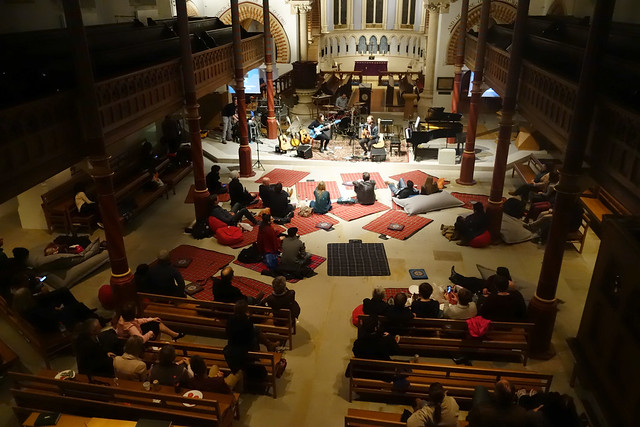