Whenever I travel by rail, I'm always looking out for signage that still uses Rail Alphabet. Mostly these are British Rail leftovers, but First Great Western in theory continues to use the font. In practice Helvetica tends to be used as an easily available substitute, but Helvetica is subtly different, and so the character is lost.

Rail Alphabet is based on Helvetica, but tweaked for legibility on signage. Ascenders and descenders are flatter and squarer - most distinctively the tail of the y is a horizontal kick unlike the long curve of Helvetica. The numbers are different - 4 has been pulled out wide to read all the way down the platform. The overall effect is cool, angular, 60s.

Branding nowadays emphasises friendliness. We will be nice to you, say the cute curvy fonts. Rail Alphabet says "We are efficient, national, modern. This is a system, and everywhere is the same." Once this was felt to be an improvement over the provincial, confusing, muddled. Now it reads as a memory of egalitarian provision in an era of shareholder value.

And while we're on the subject:

East Coast is state owned. So instead of that naff ten-minutes-in-Word logo, couldn't it be called British Rail, and use the professionally-designed BR branding? Please could this be the fall-back whenever part of the system is in state hands?

a little rant from this month's monocle on the overuse of the term 'curation'...

I tend to think that a lot of my worship stuff isn't sophisticated enough to call it curated...

Perhaps I should adopt the term "Cobbled Together Worship"

or "gaffa taped and zip-tied" :) That's probably about as sophisticated as we get.

today i did a guest post at clayfire curator. something about finding narrative when curating. the date for the post was arranged a month or two back, fortunately i co-curated the march grace service so was fresh to the subject.

i found this rigonda-m portable tv in a flea shop in penzance. it was made in 1972/73 in the ussr. the only other one i've seen is the one that was given to my father in the 70s at work. dad played with it once or twice and then we didn't see it again - it may still be in the house somewhere - i must investigate. hopefully there will be instructions, because this one doesn't work. it is surprisingly heavy for its size. 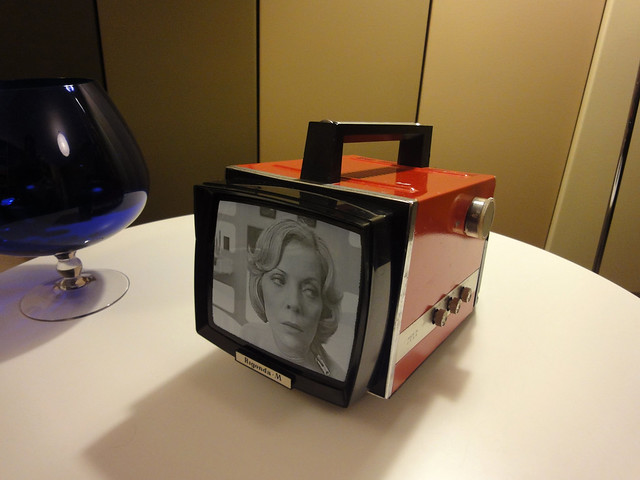 some more notes from the tautoko weekend, this time on community [as before, these are from many people]:

have any of our 'communities' become communities yet?

what are the issues a community is called to face? these need to be discerned together

how do we enable entire communities, not just enthusiastic individuals?

so what is the vocation/charism/mission of each community as a whole? ie that which it needs to pursue as a community not just as individual initiatives

how do we share the burden of risk [to prevent individual burnout or loss]?

are there practical actions we can take as communities to lift the economic constraints that rob us of time for community and god [eg our work-slavery for mortgage and pension]?

we need to learn interdependence as communities - this is difficult in an individualistic age, so need to take little steps

postcards usually have old or picturesque subjects. but in the 1960s and 70s modern buildings and artefacts were so new and exciting that they were put on postcards too, and people sent them to say that they had been there where the future was happening. i collected quite a few of these in the flea markets of cornwall, and they are making their way onto flickr here over the next week or so. i daresay i will be collecting these from now on. i thought postcard collecting was something that old people did ;)

some of my notes from the discussion sessions at the tautoko weekend [all subjective of course] [ideas of many people not just me]:

when we worry about the image of the church, are we reacting to our own baggage as insiders, or other people's as outsiders?

when we try to remake church what are we reacting to in society? what perceived barriers/preconceptions?

what are the real barriers to christianity? do people really take the media scandals/misrepresentations as the whole truth?

what are people seeking? are they seeking?

many people are looking for spiritual practices to help them with their lives, but assuming that christianity does not offer anything useful

what can people try out without strings - without belief?

are we trying to reach out to people's felt needs or their deeper needs which may be different? if we only deal with felt and expressed needs we may be leaving the deep needs unanswered. to engage with the deeper needs requires time/trust.

however the church must not be reduced to the utilitarianism of concentrating on meeting needs.

chaplaincy model - ministering to transient people who don't form a community around the chaplain - influence may be long-term and not known to original chaplain.

the unchurched maybe don't have the same hangups about the old church stuff that we do - they have not had to fight against it.

is tradition a help to us in reaching out to the unchurched? if it can be purged of unhelpful aspects such as sexism, patriarchy etc so that we can present it confidently. tradition offers reassurance - that you're not joining a rootless sect

the rhythm of the church calendar allows growth through repetition - taking us through the story each year. can this help us to communicate the idea of church as more than just a weekly event? - as a life-shaping story/discipline.

there has always been a recurring cycle of pioneers and radical change - so if it always happens, why can't we plan for it?

how can we put reevaluation and playfulness into the DNA of the established churches?

truth often seen as a precious and fragile object that must be put on a shelf and admired, but not handled in case it breaks. but truth is like the ground or gravity - it does not break when we play with it.

can we put review dates on church structures, liturgies etc - "to be reviewed in two years' time" in the assumption that change will be needed - a reminder not to allow things to go unexamined