this theatre poster has been banned from the tube in case it causes offence, but it made me laugh because it [and the situation - an actor told he is too fat to play jesus] are the perfect illustration for this piece that i wrote years ago for grace. i wish i'd called the article 'fat christ' now ;)

in fact the original version of the article wondered more about medieval depictions of the suffering christ and 'man of sorrows' as aids to affective piety, which would have been derailed by evidence of good living in the style of friar tuck. which is a long way of saying, you feel sorry for him if he's emaciated but less so if he's fat. but as we've rediscovered the feasting and partyloving jesus in recent years, should we change our images of him to suit?

the relative lack of blogging or any other creative activity lately is because most of my spare-time energies have been going into sorting out my flat. my delicious links tell the story [of inspiration more than purchase, i should say!]. hopefully the wall panels will go up this weekend. then it will be finished enough to take some photographs.

in the meantime take a look at this marvellous 60s home [dead link]. the stuff's mostly mass-market kitsch, but put together so well it's a design triumph. in this country one would call the national trust and ask them to preserve it for ever. the house is in los angeles, but almost every aspect of the interior is familiar to me from my childhood in england - clearly this idiom was universal. it brings back nagging non-specific memories - that wood wallpaper behind the dining table - who in my childhood had just that, and similar dining chairs too? my mum would know.

now for some emerging church history.

when greenbelt festival hit 25 in 1998, it planned to reinvent itself [split into two festivals, change sites and intentions]. so i decided to use my new camera to record the festival, in case it was the last of its kind. indeed, the grace service on the monday night was called 'the last supper', in case it was the last alt worship service at greenbelt. and had the festival ended there yours truly might have been the last 'act' ever at greenbelt, leading a meditation at 1.30-2am tuesday morning [the john 21 meditation, written for the slot - the last line was originally 'the world after greenbelt']

of course it didn't end there, but i've never photographed the festival in general since, feeling that i'd done it. but i discovered, late last year, that i'd never actually scanned more than a handful of the photos - just a few of the epicentre ones for small fire. so here, ten years late, is greenbelt 25 at deene park, featuring the legendary epicentre arts cafe.

a note on the venue: deene park was a country house estate, with a natural bowl in the land. the main stage and backstage were in the bottom of the bowl, with everything else arranged along a circular path around the edge of the bowl. this meant that whichever way you went you would always come back to where you started, having met along the way all the people you knew who weren't in the outfield at their tents. finding people was so much easier. everything was under canvas - so there was nowhere warm when it was cold or cool when it was hot, and the noise from the dance tent wrecked all attempts at quiet ambience, silent prayer, meditation. and marquees can get pretty muddy inside, which isn't good for electrics either. after the torrential rain and mudbath of 1997, and the not much better weather of 1998 [see photos], the move to cheltenham racecourse was partly about making sure that at least some of the main site and venues were on concrete or indoors. it took greenbelt 7 or 8 years to recover from the financial damage of the bad weather in 97/98.

These are LEGENDARY Steve. Love it. Hope you don't mind - have let the powers that be know the link to the Flickr page.

Some great people spots in the backgrounds... Jon Rag and Sooz are in there for sure!

...this evening with work colleagues at the utobeer stall in borough market. 12 specialist beers in 4 categories, with advice on tasting, what differentiates the beers and how they are produced. very interesting - we all came away having discovered some new favourites [and one that tastes like horse piss]. photo set here 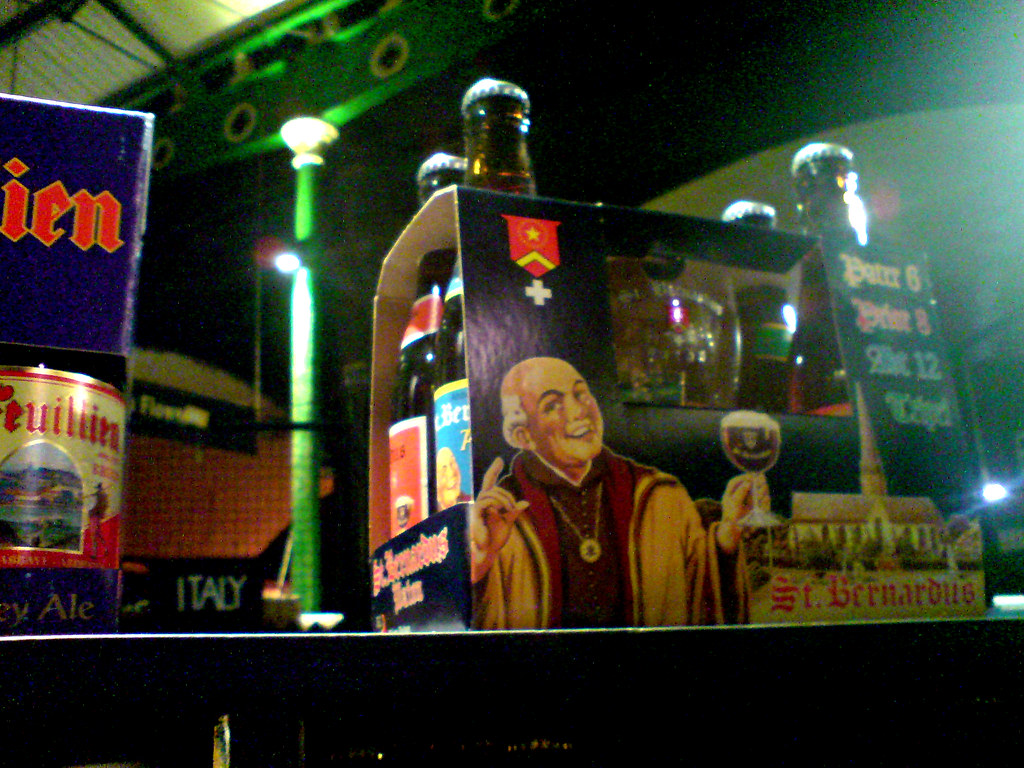 How do you know what horse piss tastes like?

you know how smell blurs into taste at the back of the mouth? this beer immediately brought back memories of walking through cattle markets and farms. and the smell/taste in the back of my mouth of animal excreta. others agreed, but it took us a while to pin down which animal.

of course it's a disturbing thought, that when you breathe in that smell of manure, you are in fact tasting actual particles of it in the air...

Blurring the species barrier again Steve. It gets worse — are you now saying that you know what horse plop tastes like?

Are you Grace guys the next NOS?